The Man Booker Prize for Fiction is awarded every year for a novel written by a writer from the Commonwealth or the Republic of Ireland and it aims to represent the very best in contemporary fiction. The prize was originally called the Booker-McConnell Prize, which was the name of the company that sponsored it, though it was better-known as simply the ‘Booker Prize’. In 2002, the Man Group became the sponsor and they chose the new name, keeping ‘Booker’.

Publishers can submit books for consideration for the prize, but the judges can also ask for books to be submitted they think should be included. Firstly, the Advisory Committee give advice if there have been any changes to the rules for the prize and selects the people who will judge the books. The judging panel changes every year and usually a person is only a judge once.

Great efforts are made to ensure that the judging panel is balanced in terms of gender and professions within the industry, so that a writer, a critic, an editor and an academic are chosen along with a well-known person from wider society. However, when the panel of judges has been finalized, they are left to make their own decisions without any further involvement or interference from the prize sponsor. 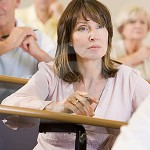 The Man Booker judges include critics, writers and academics to maintain the consistent quality of the prize and its influence is such that the winner will almost certainly see the sales increase considerably , in addition to the £50,000 that comes with the prize.

1 – The Republic of Ireland

A) is in the Commonwealth.

B) is not in the Commonwealth.

A) was forced to keep the name ‘Booker’.

B) decided to include the name ‘Booker’.

D) decided to use only the name ‘Booker’.

3 – Books can be submitted

D) by the sponsors.

4 – Who advises on changes to the rules?

B) The judging panel

A) doesn’t include women.

B) includes only women.

C) is only chosen from representatives of the industry.

D) includes someone from outside the industry.

6 – The sponsors of the prize

A) are involved in choosing the winner.

B) are involved in choosing the judges.

C) are not involved at all.

D) choose the academic for the panel of judges.

7 – The consistent quality of the prize

A) is guaranteed by the prize money.

B) is guaranteed by the gender of the judges.

C) is guaranteed by the make-up of the panel of judges.

D) is guaranteed by the increase in sales of the winner.